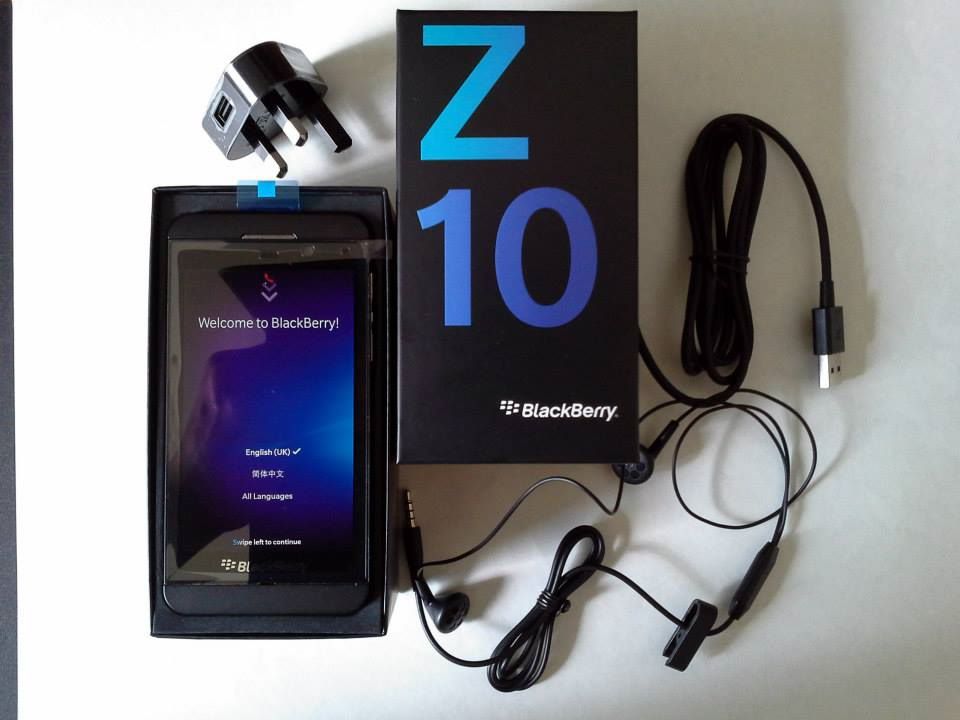 The new Blackberry Z10 is the reinvented flagship product for Research in Motion.  It incorporates the best of BB enterprise features into a compact touch smartphone.  I must say that I was pretty impressed with the BB 10 OS which performs beyond what I had expected.  The Z10 is fast, does not lag and the UI is easy to master. The Z10 is easily on par or even exceed certain other flagship Android smartphones or iPhone. The Z10 has a solid build with its rubberized black back which keeps the Z10 firmly in my hands and felt luxurious to the touch and weighs in at a  mere 136 grams.

The Z10 4.2” 1280x768, 356 DPI screen although small compared to some other Mega 8” screen it was still clear and bright even when I was viewing it outdoors in the bright afternoon sun. The 4-point multi-touch LCD was sensitive and accurate to the touch.  Using the Z10 was easy as I only had to learn 4 intuitive gestures to navigate the Z10.  That is, swipe up, down, left or right.  It’s that simple. I wondered why other manufactures has not incorporated these gestures previously.

The phone came fully charged out of the box and it was pleasure to setup.  I powered on the Z10 and it prompted me to setup a Wi-Fi profile and create a BlackBerry ID. I did this easily and the Z10 proceeded to download the latest OS and patches. And presto! The Z10 booted with the latest downloaded BB OS 10.1 loaded.

Next, I migrated my existing Android data into the Z10 using the downloaded BlackBerry Link software. During the migration, I was given the option of selecting what I wanted to copy into the Z10 such as music, pictures, videos, contact, emails and calendar information. I was rather pleased as the process was not painful or tedious. I just took about an hour and a half to migrate 8GB of music, 300 calendar entries, 1,500 contacts and several GB of photos and video files.

Installing Apps was next. This too was simple, through the BlackBerry World marketplace using my newly created BlackBerry ID.  In all, it took a few minutes to setup the following :-  2 personal Gmail profiles, 1 corporate POP3 mailbox, WhatsApp, Line, Kakao Talk, Facebook,  Pfingo bounce, Dropbox, various News Apps like CNN and CNet, Google Talk and other business and productivity Apps. Impressive - the BB10 OS is a new kid on the block, yet I was able to find and install most of my favorite Android Apps, and immediately - a plus point for anyone considering switching to the BB Z10. I was up and running in no time at all.

In the next 14 days, I was able to stress test the Z10 using it instead of my exiting Android phone. The touch interface and UI was smooth and I was able to surf the web, chat, and open multiple Apps simultaneously without experiencing any lag. This exceeded my expectations as the Z10 is powered by just by a dual-core 1.5 GHz processor with 2GB RAM and 16GB Flash. Even web pages with heavy flash content loaded swiftly after I enabled the browser to load flash by default. The 4.2” screen was a pleasure to view and does not do justice to the capabilities of the Z10.

Call quality was crystal clear as I was on the Starhub Network and utilizing its New High Definition (HD) Voice feature. and using the supplied headset, I was able to easily accept or reject calls. The built in speaker was loud and sufficiently clear for me to place the Z10 in the Board Room for a conference call. The microphone was able to pick up the voices of those seated around the able without anyone shouting! A nice touch is the three quick launch icons at the base the screen. I was quickly able to answer calls, do a search or activate the camera swiftly.

For example, when a photo opportunity presented itself, a quick slide upwards on the lock screen, click on the camera icon and I am ready to capture picture perfect moments. The 8MP 5x digital zooms and the 1080p HD video recording capabilities turns even the most amateur photographer into a pro. An exciting feature is the Time Shift mode of the camera. The camera takes multiple shots and allows the photographer to pinpoint and adjust the exact moments to create the prefect shots. My favorite app is the BlackBerry Story Maker. This is a must-have and easy to use app which stitches together photos and videos taken by the Z10 and transform them into a professional-looking multi-media presentation. Personally, I felt that this app makes the BlackBerry a serious contender for anyone considering an upgrade to their smartphone.

When I need a break, I find the Z10 an excellent entertainment. The Music player allows me to setup my favorite songs into several play lists to suit my mood. Surprising the tiny speakers was sufficient loud to fill my study room without cracking when I pump up the volume. A nice touch is the built-in mini HDMI interface - all I need to bring along a HDMI cable and connected the Z10 to a HDMI enable projector or LCD TV - no need to lug along my bulky notebook. Useful indeed when I need to do a multi-media presentation at my customer’s office or watch a movie at home.

Another of my favorite feature of the Z10 is the BlackBerry Hub. This is accessed by swiping left on any home screen and immediately, I was able to read all my notifications from one central location. A massive time saver as I no longer need to access separate applications just to read my messages coming from the various messaging apps.

For a touch device, the Z10 on screen QWERTY keyboard is responsive and I like the auto-word suggestion which is accurate and has a smart self-learning capability. It learns my quirky writing style and suggested words to help me type accurately and fast. As I tend to mistype certain letters, the keyboard remembers and subtly adjusts so that I hit the right keys the next time. Follow this link to see how easy it is to use the BlackBerry QWERTY board. Keyboard Video Demo

Overall, the Z10 was a joy to use. I was almost tempted to trade in my existing Android phone for the Z10. I would recommend the Z10 to anyone looking to upgrade their full feature phone. The BlackBerry OS 10 functions exceptionally well, Research in Motion has successfully integrated the strength of the BlackBerry enterprise features into a well-rounded device suitable for both business as well as personal use. I would rate this phone 4.5 out of 5 stars.