I'm posting this as i have contacted Starhub Hotline since the 23rd of March, and the various staff gave different technical advices and unfortunately did not solve the issue, even did so today but they have not given me a call after promising to get back to me.

I bought the Apple Watch Series 5, Nike Edition and have been trying to set up the cellular connection to my iPhone 11 Pro Max, since the 23rd of March, and am still trying but to no avail. I followed the steps carefully but did not receive the activation SMS to show that NumberShare is successful.

Attached to this post depicts the Error i received as well as the steps i followed to setup my watch. The RED CROSS Error, only occured when i reset and remove all data plans on the Apple Watch App to re-enroll the Set Up for Mobile Data as it is always stuck at "Activating" under Starhub which is also shown in the attached images.

I sincerely hope a technical team can properly diagnose this issue as it is rather unfortunate that this is such a hassle and that i should have gotten a Non-Cellular version instead, i really look forward to any constructive help that will solve this.

Always this way when awaiting the SMS

When i reset Data Plans on Apple Watch App

Hi @hasunnyboy, I'm sorry for the inconvenience this has caused you. Based on the screenshot of the error message you shared here, I would advise you to retry subscribing. But if the issue still persists, I highly suggest that you reach out to my colleagues on Facebook or Twitter so that we can log a case regarding your concern.

@hasunnyboy Just to check; was your problem sorted out finally.  What did you do?  I am having an issue with my Numbershare activation with StarHub as well.  In my case, i get a tick towards the end of the setup process but i don’t get an sms confirmation and the Numbershare does not activate.  Thanks in advance.

I'm also having this issue with my new apple watch. Went down to starhub customer service center at Plaza Sing but the prob cannot be resolved.

no sms from starhub to confirm the numbershare as well.

@pris_syan Hi there, yes problem was finally resolved after 1 week with numerous calls to Starhub. Finally it was an issue at Starhub and nothing to do with our setup process.

FYI: Once you finish the Numbershare activation via Apple Watch, if it’s successful, you will see your telco showing up in Mobile data right after you have confirmed your NRIC. See a snapshot of how it will look in Apple Watch app under “Mobile data”. If you don’t see that, then do check back with StarHub again. You can ask them to refer to my case and the resolution done on mine. 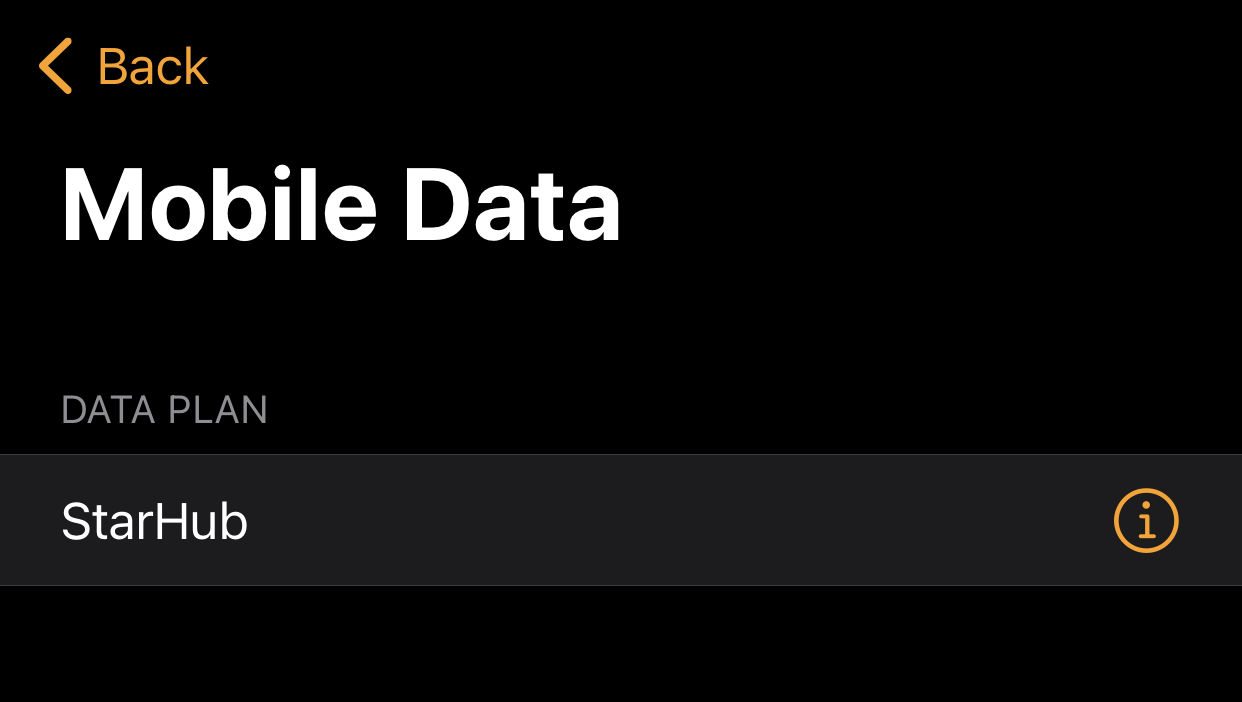 Hi @pris_syan, sorry for the inconvenience this has caused. Just to check, what error message did you receive when you try to activate NumberShare?

Same problem here. Went down today. Not resolved. Said I would get a call today from the technical team by 6pm. Never came. Horrible.

Hi @Brybrybry, apologies for the inconvenience caused. What about today? Did you receive a callback?

yes, I did. but of no help and they said i have to wait another 24 hours while they check with the technical team again. I thought the call i was waiting for was from the technical team. No idea whats going on at the back end. really messed up.

We sincerely apologize for the delay and inconvenience. It is never our intention to make things hard for you. I suggest to follow up via Facebook Messenger by clicking the link below so they escalate it to the relevant team.

Hi, I'm still having this same issue one week after trying to set it up, I've raised a ticket but after several phone calls they still haven't resolved. Any thoughts?

I have the problem with my apple watch 6 also. Will somebody able to look into this issue and fix asap

Hi, also having this issues. Been trying for days and can’t even get cellular up. Using Apple Watch 6 with IPhone 11 Pro but to no avail.

I have exactly the same issue, starhub mobile plan on apple watch app not in use, after doing over unsubscribing and subscribing several times...been calling since last week...right after bought the iwatch series 6 in tampines starhub since Nov 27 2020...I been told that they starhub staff will revert to me on monday Nov 30 but still no update...please help this is the reason I bought model with cellular.

I’m so curious why they would avail a service that isn’t totally usable for the masses. I don’t see this happening with other service providers honestly.

Hi @juliuss, we're sorry for the inconvenience caused. I highly suggest that you get in touch with our Customer Support Team via Facebook Messenger by clicking the link below so they could escalate your concern to the relevant team to further assist you.

Since this is an already known issue, I supposed you guys already have a documented solution, do you?

For cases like this, we need to log a case and escalate them to the relevant team in order to further assist our customers. I hope you understand. Thank you.

I have similar issue as well and I do not use Facebook.

Is that the other way to get an escalation?

Same issue, reset watch many times, re activate numbershare but then customer service do not do this on my own and got it back on StarHub app. I told them the reason because number share isn’t working on my Apple Watch always got the red error.. call up for the 5th or 6th time and issue cannot be solved.. giving empty promises that I can expect a call back within the next day so I waited like a fool. Call them back and they say they will escalate this matter but need another 3 working days.. I’m so utterly dissapponted. I signed this contract not even a week and so much problem surfaced.. customer service I don’t know what are they doing all they can say is I’m so sorry here let me throw you to this and that and forever beating around the bush.. A simple courtesy like giving an update that the issue is still under investigation they said when I called back.. but they didn’t, only empty promises. I don’t really know what to do now.. f*** frustrated.

Hi @LowellTan, we're genuinely sorry that it's taking longer to resolve your concern. Unfortunately, I can't give you further details nor updates as I don't have access to your account details here. May I trouble you to send a message to our Customer Support via Facebook Messenger by clicking the link below to follow-up on your concern? Thank you for your understanding.

@LowellTan that sounds really bad... No wonder they are giving 3 months free.

I hope it gets resolved soon.

Can someone in starhub admit that the numnber share is a total failure so that we have peace of mind :) rather than we keep on waiting for the update but nothing comes? or at least give us a a specific timeline to fix or to decide what to do next?

@Carla_P so among all those that posted on messenger for escalation, how many cases were actually resolved?

As what @juliuss mentioned, all that's probably needed was an admission that numbershare was a failure. At least we can plan to switch telco instead of hanging around since March like the OP.

Hi there @Nickygoh, my sincere apologies as your concern is taking longer to get resolve. Unfortunately, I can't provide you further details since your concern should be redirected to our Technical Support Team. I hope you understand. Thank you.

I started thread to tally number of users facing this issue hoping we can get sufficient critical mass for some actions to be taken instead of getting led around in cycles of sub/resub.

I want to be fair and share the good news, this morning ~6:30AM Dec 5 suddenly my watch already has a signal, so far as of this writing ~8:20AM still not disconnecting hope the issue is already settled...

perhaps let us know how this issue being resolved so that we can apply to everyone, well hope this is not just an intermittent system error :) I will closely monitor this and revert to all for the update.

That's great, I just canceled my subscription last night and received my sms this morning.

I guess just leave the watch subscribed and from time to time open the iwatch app on iphone to attemp mobile data configuring...until it connects ,,

Just out of curiosity, does it go into “Not In Use” before it works? Thanks in advance

@joelseah ,,my case yes not in use for like 4 days until just this morning connection stablished when i do mobile data configuring.

So is it still working for you?
I resubbed 24 hours ago and haven't received the confirmation sms...

Hi Carla, i tried to reply to you directly.

Just try again...Unable to set up at all. Its getting worst!

Hi @kitlim51, in this case, I highly suggest that you get in touch with our Customer Support via Facebook Messenger so they could escalate your concern to the relevant team. Thanks.